One year after their sentence, the Saharawi Political Prisoners of the Gdeim Izik Group remain subjected to torture and ill-treatment

PUSL.- 19 of the original 24 Saharawi political prisoners of Gdeim Izik Group remain in prison, with sentences that range from 20 years to life imprisonment.

They have been subjected to sever ill treatment and in some cases torture, as well as extreme medical neglect after their last sentencing on 19th of July 2017 by the court of appeal of Salé, Rabat.

The prisoners of Tiflet2 are since their arrival to this prison in prolonged solitary confinement without meaningful human contact, which is considered one of the harshest forms of torture leading to both physical as psychological damage. The families of these prisoners presented several complaints to the Moroccan authorities and CNDH (Conseil National des Droits d’Hommes) without receiving any response and sent also an urgent call to the International Red Cross, regarding the situation of the prisoners and the arbitrary refusal of visitation right. This prison is over 1200km from El Aaiun in Western Sahara and  currently this group is the one that is in a location more farther away from their families.

All prisoners of the Gdeim Izik group suffer from extreme and intentional medical neglect and are in dire health situation.

Mr.  Abdallah Toubali has undergone a blatter surgery on July 6th 2018. Mr. Mohamed Tahlil has been transported repeatedly to the hospital without having been treated and Mr. Brahim Ismaili’s legs are so swollen that he is not able to walk anymore. This are only a few examples of the health situation of the group.

Maitre Olfa Ouled the french lawyer of this group has been sending complaints as well as request for immediate investigations regarding the statement of the prisoners and their families. She is also waiting for authorization from the prosecutors of the regions where the several prisons are located, to visit them, according the Morrocan-French judicial Convention of 1957.

The process of Gdeim Izik is extremely complex and is not finished.

The saharawi defense team confirmed that they were still waiting for the decision of the court de cassation (Moroccan supreme court) .

We recall that the Court of Cassation referred the case to the Court of Appeal for the latter to give a new ruling, as the military court has not clearly demonstrated that the prisoners of the Group of Gdeim Izik had ordered or incited the perpetration of criminal acts by the person or persons concerned, or criminal intent on their part, elements which made the judgment subject to being declared null and void.  The court de cassation has now to decide if the new trial has been able to prove what the military court could not and also to answer to the questions raised by the Saharawi and local defense lawyers concerning the infringements during the process.

In fact if the Court de Cassation decides that the court of appeal was not able to prove the accusations the prisoners have to be released.

According to the International observers (see the reports at https://porunsaharalibre.org/en/informes-gdeim-izik/) this trial did not in any way correct or answer the shortcomings pointed out by the Supreme court in the decision of the 27th of July 2016 when transferring the case to the appeal court; The evidence presented did not prove any commitment of crimes by any of the accused; and the evidences presented by the prosecution have no scientific value and are either to be considered invalid or illegal. Furthermore the witnesses brought forward by the prosecution did contradict themselves, lacked credibility and the witnesses presented as “inhabitants” of the camp appeared without any information from where they came after seven years and how they were found.

Therefore the whole case is still  based on the declarations, statements and documents signed under torture and ill treatment which is a clear violation of the Moroccan Constitution, Moroccan Law, the Torture Convention and the Universal Declaration of Human Rights (both ratified by the Kingdom of Morocco).

Parallel to the legal actions the international solidarity movement has therefore also continued and initiated  new serious of actions regarding political pressure for the immediate release of the Saharawi Political Prisoners.

MINURSO the mission of the  United nations for Western Sahara still doesn’t include the protection of the human rights in the occupied territories, one of the factors that led to the plight of these political prisoners  who have all been tortured and are still under ill-treatment and allows Morocco to continue to abduct and put under arbitrary detention the saharawi population without any consequences.

Below a short summary of the Case

In October 2010 the Saharawi population went to the desert in the outskirts of El Aaiun and put up thousands of tents in protest against the social, economic and political apartheid imposed by the Moroccan regime in the occupied territories in Western Sahara since 1975.

The peaceful protest camp was under siege by the Moroccan authorities during one month, after which it was brutally dismantled in the dawn attacking the men, women, elderly and children in the camp which gathered entire families.

Before during and after the dismantlement hundreds of Saharawi were abducted and tortured, a group of 24 Saharawi men remained in prison and is known as Gdeim Izik Group.

After almost three years these men were trialed in a military court in February 2013,  that presented no other evidences to support the accusations other than the documents produced by the Moroccan police and signed by the accused under torture and extreme ill-treatment.

During this trial the prisoners denounce the grave tortures they suffered. The military trial was unfair and according to the international observers present as well as many international NGO’s did not meet the standards of a fair trial and was considered null and void. The group was sentenced from 20 years to life imprisonment and two of the prisoners (Abderrahman Zeyou and El Machdoufi Taki) and were released with time served and Mohamed Ayoubi was put in provisional release due to his health situation.

In February 2013, after the military court  an appeal was filed by the prisoners to the Court de Cassation (Moroccan Supreme court).

In November 2013 an international observer with the mandate of 8 of the prisoners presented their torture complaints to the special rapporteur for torture of the UN.

In December 2013 the working group on Arbitrary detention of the UN visited Morocco and the Gdeim Izik group stating in its report that “The Moroccan criminal judicial system relies heavily on confessions as the main evidence to support conviction. Complaints received by the Working Group indicate the use of torture by State officials to obtain evidence or confessions during initial questioning. Courts and prosecutors do not comply with their obligation to initiate an ex officio investigation whenever there are reasonable grounds to believe that a confession has been obtained through the use of torture and ill-treatment.”

During the visit of the working group to the Gdeim Izik prisoners, Mr. Abdel Jalil Laaroussi was transferred to another cell block so that the UN representatives could not see the physical and health state of the prisoner (life sentence) and hear his complaints regarding the medieval torture he was subjected to. 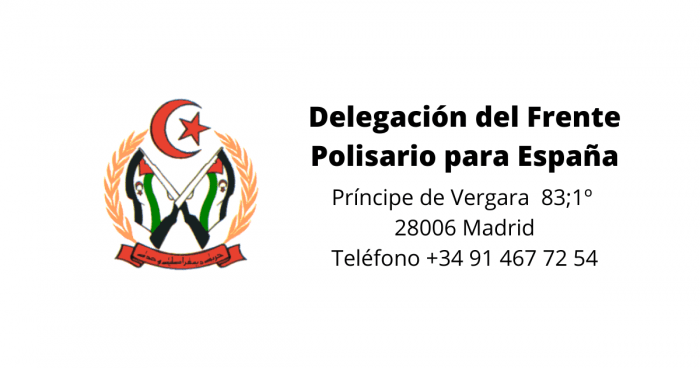 Germany key to stopping “return of war” in Western Sahara

Western Sahara. Mediator has tough but not impossible task

This website uses cookies so that we can provide you with the best user experience possible. Cookie information is stored in your browser and performs functions such as recognising you when you return to our website and helping our team to understand which sections of the website you find most interesting and useful.

Strictly Necessary Cookie should be enabled at all times so that we can save your preferences for cookie settings.

If you disable this cookie, we will not be able to save your preferences. This means that every time you visit this website you will need to enable or disable cookies again.