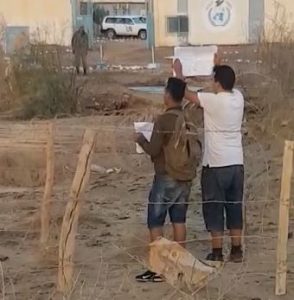 PUSL.- Below is the letter sent this morning by two young Sahrawi students who were able to enter MINURSO’s headquarters in Smara, Occupied Territories of Western Sahara despite multiple check points.

Said Abba Sheikh and Mohammed Ahmed Taleb Ahmad were aware that MINURSO would most likely hand them out to the occupation authorities, as they have done over the years with a number of Saharawis who have sought out and asked for their physical safety inside the MINURSO mission.

In fact, shortly after entering the MINURSO area, the officials of the “peace” mission delivered the two young men to the Moroccan army that transported them to the Gendarmarie Royal headquarters.

In the letter that they had sent before this protest action to the SG, António Gueterres they were very clear, the claims presented are those of the Saharawi people – the right to self-determination, the end of violence against the population and respect for the most basic human rights.

The two young people are willing to risk their lives to send this simple message to the Secretary General, will anyone listen to them?

Saïd Abba Sheikh; a Sahrawi, student in the university of Fés, Morocco.

Mohammed Ahmed Taleb Ahmad, a Sahrawi student in the university of Agadir, Morocco.

To the distinguished Secretary General:

We are writing to you this letter after we have decided to make a sit-in in the MINURSO headquarters in Smara, and we are aware of the danger we are putting ourselves in and we are sure that the Moroccan authorities will punish us for taking this step, based on similar experiences of people that thought that entering the headquarters of MINURSO would guarantee their dignity and physical safety but that didn’t happen. Moreover in some cases they were handed over to the Moroccan police by the MINURSO where they were insulted in a attempt to diminish the role of the United Nations in ensuring peace, security and stability. And so we decided to face it and take the risk of it because we believe in our noble cause that deserves everything to defend it.

Mr. Secretary General we as young Sahrawis would like you to hear our voices using all the ways and tools available to us under the media blackout and the closure of the territory to the international human rights organizations, international media and international observers, and we want to emphasis that the youth of Western Sahara is depressed and hopeless because of the marginalization, exclusion and opression while the international community is silent, this silence is represented in the members of your mission that exists for over two decades but we do not see any glimmer of hope to end the sufferance of the Sahrawi people who suffers separation and displacement while the Moroccan occupation is plundering the natural resources and on the other side using
Force and violence against anyone that demends his basic rights or demonstrates against this unbearable situation.

Mr. Secretary General we are protesting today in the headquarters of MINURSO but we do not want to isolate our demands from the general demands that the Sahrawis have for over 40 years, being the first one self determination and the protection of their rights. We would like to draw your attention to the sufferance of the Sahrawi youth who encounters uncertain fate because of the oppression of Morocco which uses on one hand propaganda and on the other hand violence and suppression. Thousands Sahrawis that obtained certificates of higher education have no jobs in addition to thousands of Sahrawi students who study in Moroccan universities in inadequate conditions that hinder them to continue their studies.

Mr. Secretary General we hope you intervene and use all the powers to end this unacceptable situation.
Please accept the assurances of our highest consideration.