On Friday, 30th of March the Moroccan authorities detained ten members of a group of young unemployed Saharawi who made a non violent protest on top of a building, in Smara Avenue in occupied El Aaiun, next to Matala neighborhood.

The moroccan authorities dismantled by force the protest and at 18h30 detained the young Sahrawi who were taken in handcuffs to the police headquarters.

During their detention until the group was bruttaly beaten with bastons and other objects, forced to sit on the concrete floor, insulted, ill treated and menaced.

The families of the protesters gathered in front of the police building where they were held demonstrating their protest and solidarity.

The occupation forces also attacked and raided houses of saharawi near the protest site. END_OF_DOCUMENT_TOKEN_TO_BE_REPLACED

After 22 days of hunger strike the Sahrawi political prisoners of the group of Gdeim Izik on hunger strike since March 9 present serious symptoms of health and loss of physical autonomy.

According to the family members who visited yesterday the prisoners in strike in the Kenitra prison the situation is alarming.

Mohamed Bourial was transported by 4 guards to the visiting room as he is incapable of standing by his own. Bourial reaffirmed that he will not give up the hunger strike until his demands are met. According to the mother and the sister, Bourial vomits blood and its general state is alarming.

Abdallahi Lakfawni was transported to the infirmary due to loss of consciousness, but after a short time he was put back in the punishment cell. END_OF_DOCUMENT_TOKEN_TO_BE_REPLACED

Life of Saharawi political prisoners in hungerstrike in danger

Yesterday the brother of the saharawi political prisoner Sidi Abdallahi Abbahah visited him in Kenitra Prison and told us that the situation is alarming.

– He has extreme pain in his body
– Has only one blanket on the floor and another to cover himself but very thin and suffers from acute cold
– Has double vision
– Requested bottled water several times, but the guards refused to give it to him and said “you can die or live we don’t care”. Salt and sugar are also denied.
– He has no knowledge about his fellow prisoners in hunger strike, he didn’t knew if they were alive or dead, if they continue or not the hunger strike
– he was not visited by the doctor

Mr. Abdallahi Abbahah said he would continue his hunger strike until his demands were met, the respect of his basic rights. END_OF_DOCUMENT_TOKEN_TO_BE_REPLACED 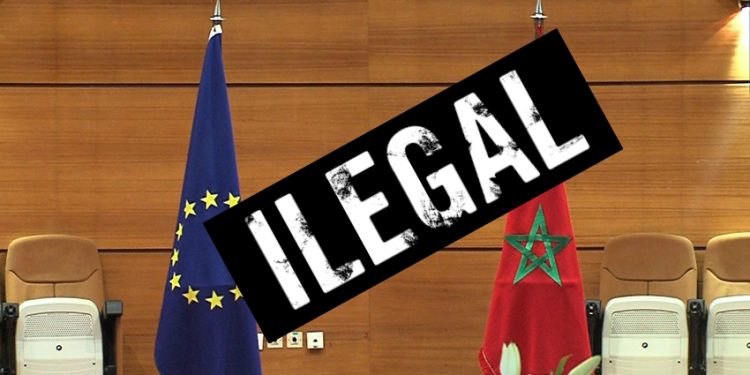 elmoudjahid.com.- The European Commission will respect the judgment of the Court of Justice of the European Union (CJEU) which concluded on 27 February that the EU-Morocco fisheries agreement is not applicable to Western Sahara, said the head of the European diplomacy, Federica Mogherini who stressed that the decisions of this Court are “binding” for the EU institutions and its member states.

The European Commission will respect the judgment of the Court of Justice of the European Union (CJEU) which concluded on 27 February that the EU-Morocco fisheries agreement is not applicable to Western Sahara, said the head of the European diplomacy, Federica Mogherini who stressed that the decisions of this Court are “binding” for the EU institutions and its member states. “The Commission will respect the judgment of the CJEU, whose decisions are binding on all the EU institutions and all the Member States,” she wrote in her response to MEP Miguel Urban Crespo, who urged Commission to suspend negotiations on new trade, agriculture and fisheries agreements with Morocco.

The EU High Representative for Foreign Affairs and Security Policy has stated that the Commission has “taken note” of the ECJ judgment and “closely examines it in order to determine the consequences and possible measures to be taken “. Referring to the other judgment of the CJEU delivered on 21 December 2016, the head of European diplomacy acknowledged that the EU-Morocco Association Agreement “does not currently provide any legal basis for granting tariff preferences to products coming from occupied Western Sahara. END_OF_DOCUMENT_TOKEN_TO_BE_REPLACED

Horst Köhler  in El Aaiun for a four-day visit

yabiladi.com-. Horst Köhler plans to visit El Aaiun in the first week of April. The UN Secretary-General’s personal envoy to Western Sahara will be visiting for four days.

At MINURSO headquarters, preparations for the German mediator have already begun, including painting of the headquarters.

During his stay, the personal envoy of the UN Secretary-General plans to tour, by plane, the four Team Site of MINURSO installed in the region. In El Aaiun, Köhler should also meet with representatives of pro-Polisario associations, unionists and Moroccan authorities.

The choice of the timing of the visit is well calculated. Indeed, this date is a few days away from the presentation of a new report by Antonio Guterres on Western Sahara, which reduces the margin of maneuver of Morocco. END_OF_DOCUMENT_TOKEN_TO_BE_REPLACED

Today the mothers of Abdallahi Lakfawni and El Bashir Boutanguiza detained at Kenitra Prison and Brahim Ismaili’s family detained at Ait-Melloul Prison 2 were allowed to visit the prisoners who are on their 18 day of hunger strike and in isolation.

These families reported that the prisoner are in an alarming state of health, inability to move, body pain, dificulty to see, frequent nausea, headaches, kidney and stomach ache. According to the families the prisoners are victims of medical neglect.

The prisoners are kept in punishment cells known as kacho or coffin cells infested with insect and vermins without appropriate ventilation and absence of basic hygiene. The cells are cold and humid and the prisoners do not have sufficient blankets.

The prison administration does not allow them to drink bottled water nor are they allowed to add sugar or salt to the tap water. END_OF_DOCUMENT_TOKEN_TO_BE_REPLACED

After several complaints sent by their French lawyer Maitre Ouled to the Moroccan judicial authorities, to ask for an investigation of the inhuman treatement the prisoners are subjected to due to the isolation, the health statuts of the detainees remains preoccupying.

It has to be underlined that, the Moroccan law only authorizes isolation for security or precaution reasons which do not apply in the case of the Gdeim Izik prisoners.

The political prisoners are now in hunger strike since 9th of March demanding that the morrocan authorities improve their detention conditions by notably transferring them to near to their families. END_OF_DOCUMENT_TOKEN_TO_BE_REPLACED

Saharawi attacked in the occupied city of Dakhla 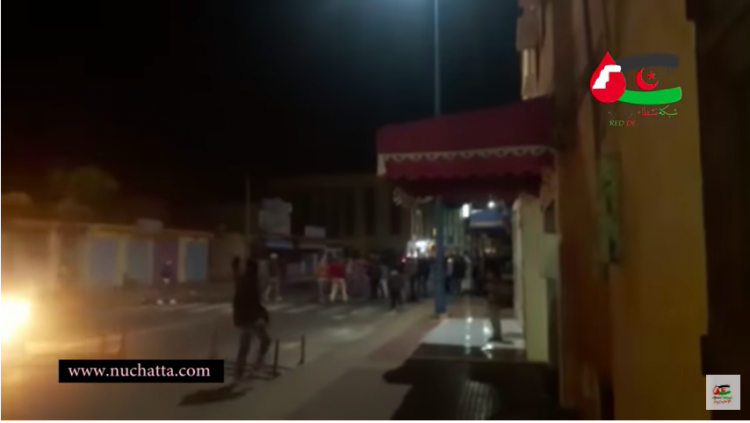 According to Network Activists News dozens of young saharawi demonstrated on th24th of March in one of the main street of Dakhla in the occupied territories of Western Sahara.

The mass demonstration started at 23:50, in which dozens of young Sahrawi participated. They shouted slogans calling for freedom and independence and the release of all Saharawi political prisoners in Moroccan prisons.

The city of Dakhla, is under an oppressive crackdown. The network of news activists recorded an intensive presence of Moroccan agents in the alleys where the majority of Saharawi live. END_OF_DOCUMENT_TOKEN_TO_BE_REPLACED

Kohler: my mandate is to come up with a solution that guarantees the self-determination of the Saharawi people

Former German President Horst Kohler clearly defined its mandate as Personal Envoy of the Secretary-General of the United Nations for Western Sahara, and explained to the Security Council that he was trying to “find a path to the future of conflict that can lead to a solution that guarantees the self-determination of the Saharawi people.”

“My role in this process is not that of an referee who must judge who was right and who was wrong in the past. My mandate is to find a way for the future, a path that can lead to a mutually acceptable solution and which allows self-determination of the Saharawi people, “said Kohler in his first presentation on Western Sahara, according to Algerian agency APS.

Kohler, explained his vision of the peace process which he foresees to restart soon, and said that its objective was to restart direct negotiations between the two parties in the conflict in the course of 2018. END_OF_DOCUMENT_TOKEN_TO_BE_REPLACED

Political prisoner Mohamed Bani, who was on hunger strike for 14 days that started on the 9th of March, ended his protest today after a meeting with the Regional Director of  Prison and Reintegration who promised him a transfer to Bouzakarn prison and authorization for his family to visit 4 days a week and two weekly phone calls.

In a telephone call this morning with his wife, Bani said that he is very sick.

Mohamed Bani Sahrawi political prisoner of the Gdeim Izik Group has been tortured and is serving a life sentence. END_OF_DOCUMENT_TOKEN_TO_BE_REPLACED

Unemployed saharawi attacked by forces of the moroccan occupation 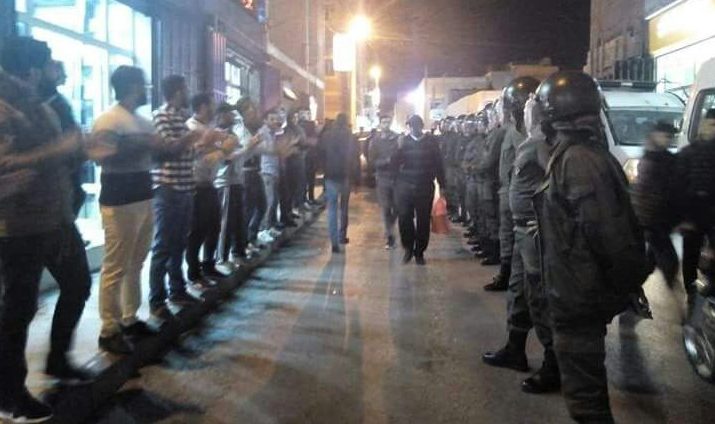 The group of unemployed saharawi, called ELKASAM organized on Monday March 19 at 20h30 a peaceful protest in one of the main avenues of El aaiun, capital of the Western Sahara.

Half an hour after the beginning the moroccan occupation forces invested against the protesters causing various injured.
Two protesters, Nafeaa Elkasimi and Boubakar Bilaamach were seriously injured.

Protests of unemployed saharawi have been carried out almost weekly being always target of immediate repression by the Moroccan authorities who do not tolerate any kind of manifestation of the Saharawi population. END_OF_DOCUMENT_TOKEN_TO_BE_REPLACED