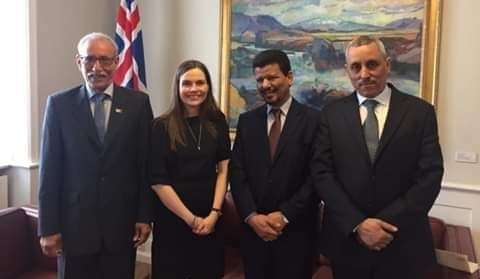 PUSL / SPS.- Katrin Jakobsdóttir Prime Minister of Iceland, who received the President of the Republic, Secretary General of the Polisario Front, Brahim Ghali, expressed on Wednesday her country’s support for the efforts towards a solution based on respect for international legality and United Nations resolutions for Western Sahara.

The meeting focused on the latest developments on this issue and the United Nations efforts to bring the process of decolonization of Western Sahara to a successful conclusion, in addition to the action of the personal envoy of the United Nations Secretary-General, ex-president Horst Köhler, to find a solution to allow the Saharawi people to exercise their right to self-determination and independence.

Furthermore, the Saharawi President informed the prime minister of the intransigence of the Kingdom of Morocco and the violation of the latter of its commitments concerning the holding of the referendum of self-determination, as agreed by the parties under the supervision of the Security Council.

Brahim Ghali denounced the human rights situation in the occupied territories of Western Sahara and the systematic repression inflicted by the Moroccan authorities against Saharawi civilians, reiterating his call for the immediate release of all Saharawi political prisoners who are still languishing in the Moroccan prisons.

The meeting also reiterated the denunciation of the Polisario Front to include Western Sahara in the illegal trade agreements between the European Union and the Kingdom of Morocco, calling for the immediate cancellation of these agreements, which commit the European peoples in unlawful activities, in violation of international law, international humanitarian law and judgments of the Court of Justice of the European Communities.

In the meeting in the Icelandic parliament, the Ghali exposed once again the present situation and it’s developments and called on the Icelandic parliamentarians, European and international institutions to put an end to the serious violations of human rights committed by the Moroccan occupation authorities in the occupied territories, release of all Saharawi political prisoners and the cessation of illegal exploitation and Moroccan sacking of Saharawi natural resources.

Last March the Icelandic Parliament ratified the decision adopted in 2014, in which it asked the Islandic Government to work in international forums to guarantee the right of the Saharawi people to self-determination as stipulated in the resolutions of the Security Council and the General Assembly of the United Nations. 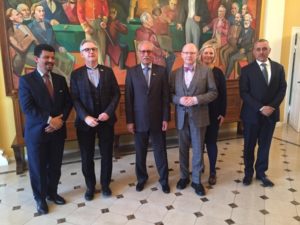 At the end of his visit to Iceland, the President met with several members of the Association of Friends of the Saharawi People in the European country, with representatives of civil society, to whom he thanked his continued solidarity with the struggle of the Saharawi people.

The President of the Republic was accompanied on this visit by Mohamed Yeslem BaIsat, member of the National Secretariat of the POLISARIO and Ambassador Counselor, and Abdati Braika, Councillor of the Presidency.