PUSL.- According to Moroccan media, Burundi opened this Friday its general consulate in El Aaiun, the capital of occuoied Western Sahara.

The opening of Burundi’s consulate is another violation of international law and a desperte attempt by Morocco to pretend that the occupation of Western Sahara is legal.

Burundi’s consulate in El Aaiun is the eighth diplomatic representation , all consulates are from african countries, several of them on verge of civil war and extremly poor.

Morocco has been “extremly efficient” in exploiting the weakness and instability of this states with economical support in change for political “mise en scène”.

END_OF_DOCUMENT_TOKEN_TO_BE_REPLACED

PUSL.- According to information from the family and lawyer Maître Olfa Ouled, Houcein Zawi, Saharawi political prisoner from the Gdeim Izik group, is in a deplorable state of health.

Zawi suffers from asthma and various chronic pains that resulted from the torture he has been subjected to since his arrest in 2010.

This week the family reported that Zawi has serious kidney problems and has suffered blood loss in the urine.

Despite multiple requests to the director of Kenitra Prison, where Zawi is located, no medical visit has yet been made.

Zawi sent a request for medical consultation to the Directorate-General for Penitentiaries and Social Reinsertion (DGPR) in Morocco.

French defense lawyer Maître Ouled addressed an urgent request for assistance to the king’s attorney general, DGPR and a communication to the National Human Rights Council of Morocco.

This is yet another case of intentional medical malpractice that Saharawi political prisoners and in particular the group of Gdeim Izik have been victims of.

Despite the multiple complaints made by both the prisoners and their lawyer, they still don’t have medical assistance.

END_OF_DOCUMENT_TOKEN_TO_BE_REPLACED

FEBRUARY 27, 1976: PROCLAMATION OF THE INDEPENDENCE OF THE SAHRAWI ARAB DEMOCRATIC REPUBLIC

PUSL.- 44 years ago the Polisario Front proclaimed the constitution of the Saharawi Arab Democratic Republic on February 27, 1976, the day after the last Spanish colonizing presence left the area in a shameful way.

Spain decided not to protect the civilian population of the province 53 as it called Western Sahara, despite having already witnessed the bestiality of Morocco with the bombings with Napalm and White Phosphorus a few days before.

During the night the territory changed from Spanish hands to Moroccan and Mauritanian hands. Mauritania signed its peace agreement with the Polisario Front in 1979, renouncing its occupation of Saharawi territory and the Organization of the African Union and different countries recognized the new republic. However, Morocco, instead of doing the same, annexed the part that was occupied by Mauritania and continued with the occupation.

END_OF_DOCUMENT_TOKEN_TO_BE_REPLACED

As published by the Spanish News paper ABC, the Spanish Congress yesterday urged the Government to firmly defend the waters of the Canary Islands and Western Sahara against Morocco. The motion registered by the Canary Coalition (CC) was passed unanimously in the lower house and was presented after a warning last week to the Foreign Minister, Arancha González Laya, of the movements of the neighbouring country.

“The information provided in this parliamentary headquarters has not been reassuring,” said Ana Oramas (CC), who asked for “priority” in the agenda of the President of the Government for a visit to Morocco and claimed “a firm position” of the Executive. Oramas also called for promoting the process of dialogue between Morocco and the Polisario Front to reach “a just, lasting and mutually accepted solution by the parties for Western Sahara.”

PP, Cs and Vox lamented the “weak” position of Pedro Sánchez for not defending maritime sovereignty. Guillermo Mariscal (PP) expressed that they are unaware of “the interests” defended by the Government of PSOE and United We can (UP) after its inactivity: “The bite that has occurred to the Spanish waters has failed to wake up this Government,” said Mariscal, who denounced that “they continue without defending the Canarian interests”.

END_OF_DOCUMENT_TOKEN_TO_BE_REPLACED

PUSL.- According to a communiqué of IAJUWS last Tuesday, February 25, 2020 at 8:15 p.m., Moroccan forces have banned the entrance to the city of El Aaiún, capital of Western Sahara, to Spanish lawyer Ana Sebastián Gascón, who on behalf of the General Council of the Spanish Advocacy was going to attend the trial against the Saharawi activist Jatri Farachi Dadda, arrested on December 25, 2019 in the city of Smara for his participation in a peaceful demonstration for the self-determination of Western Sahara.

Dadda was transferred three days after his arrest, to the Black Prison in El Aaiún where he is awaiting trial, to be held today, Wednesday, February 26, in the Moroccan Criminal Court in El Aaiún

The Spanish lawyer was approached upon arrival at El Aaiún airport, at the foot of the plane’s stairs, by more than 6 Moroccan agents in civilian clothes, who without any explanation led her to the passenger terminal separating her from the rest of the passengers. The agents asked for her documentation consisting of passport and official accreditation from the General Council of Spanish Law to act as an observer in the trial and carry out the work of Legal Observation in the Western Sahara Territory.

END_OF_DOCUMENT_TOKEN_TO_BE_REPLACED

.- The government, through the Ministry of International Relations and Cooperation issued a statement renouncing the opening of consulates in the occupied territories of Western Sahara by some African countries.

Selma Ashipala-Musavyi, Executive Director in the ministry said that the act is in direct conflict with United Nations and African Union resolutions and support of the occupation of Western Sahara and the concomitant suffering of the Saharawi people.

“The government of Namibia has noted with grave concern that some African countries have been lured by the occupying power of the Saharawi territories to open consulates in Laayoune and Dakhala, in direct and flagrant violation of the African Union and United Nations resolutions on the inalienable right of the people of Western Sahara to self-determination and independence through unconditional implementation of UN Security Council Resolution on holding of a referendum in Western Sahara,” Ashipala-Musavyi said.

The government reiterated its support of Western Sahara in their call for self-determination, calling for the African Union to remain seized with the matter of Western Sahara till the relevant AU and UN resolutions on the matter is implemented.
END_OF_DOCUMENT_TOKEN_TO_BE_REPLACED 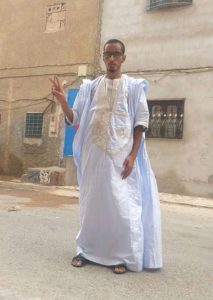 PUSL.- The young Saharawi activist Nafai Al-Hasnawi was released yesterday after serving 2 months in the black prison of El Aaiun.

The young man had been unfairly accused of “throwing stones”.

According to his family and as reported by Nafai, he was tortured by the Moroccan occupation authorities in the police car and at the police station.

Due to the illtreatment and torture Nafai was very ill in prison, and his hearing and sight were seriously affected.

END_OF_DOCUMENT_TOKEN_TO_BE_REPLACED

Pablo Iglesias, who are your brothers?

PUSL.- Pablo Iglesias declared at the 39th European Conference of Support and Solidarity with the Saharawi People on November 14 and 15, 2014 in Madrid, “our brothers will not be abandoned” referring to the Saharawi people and criticized all Spanish governments since 1975 affirming that “who has governed us seems to have as its only country ” to be pro-business “.

While Pablo Iglesias is in a coalition government, it is natural that consensus has to be present in the negotiations. What is not normal is that he yields on points that were announced as being an absolute truth and a compromise that could never be forgotten.

END_OF_DOCUMENT_TOKEN_TO_BE_REPLACED

“SIGHS – leaving and returning ” – new book about the Saharawi people

PUSL.- On March 7 at 7 pm, the book SUSPIROS DE IDA Y VUELTA (SIGHS – leaving and returning) written by Isabel Lourenço and Esperanza Jaén, will be presented at the House of Culture of Lebrija, Sevilla.

The book can be ordered online at Readbook.es or in bookstores.

– When and why did Western Sahara interest you?

– How was born the idea of making “SIGHS – leaving and returning”? What will the reader find in this book?

The book consists of stories that we were both writing at the same time and without knowing about each other. Through a mutual friend (Fito Alvarez Tombo) we found out that we were both writing and sent each other the stories. We were very surprised that although with different styles sometimes, the subject and the way of writing and seeing the situation were very similar. So we decided to join the stories and transform them into a common book.

The reader will find reality. He will not find decorated heroes, or glorified martyrs, what he will find is the flesh, blood, nobility, suffering and dignity of the Saharawi people.

END_OF_DOCUMENT_TOKEN_TO_BE_REPLACED

Moroccan occupation authorities, both, police and military surrounded the demonstration insulting and threatening the protesters.

This peaceful demonstration is yet another in the long struggle of resistance of young Saharawis in the occupied territories, victims of social, economic and social apartheid resulting from more than 4 decades of savage occupation.

END_OF_DOCUMENT_TOKEN_TO_BE_REPLACED

PUSL.- Two years and eight month after the last judgement of group of political prisoners known as the Gdeim Izik Group the 19 saharawi detained in Moroccan prisons continue to be object of ill treatment.

The Gdeim Izik Saharawi political prisoners continue to have lack of medical assistance which is repeatedly refused by the. Moroccan authorities although most of them suffer from chronic diseases and others resulting from almost ten years of incarceration, torture and isolation.

The majority of these prisoners are in prolonged isolation since their dispersion to different prisons in 2017. This form of punishment is considered one of the worst tortures that have not only serious psychological but also physical impact.

The restrictions on contact with their families due, not only to the long distances the prisons are located from El Aaiun (642 to 1300km),but also the arbitrary denial of visitation rights and the fact that phone calls are reduced to a few minutes per week for some of them increase the isolation factor.